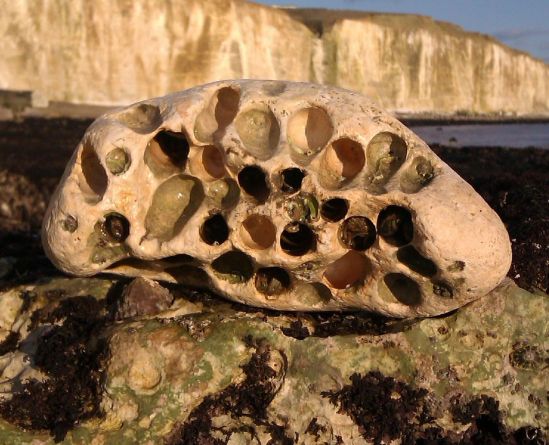 A large chalky rock doing its best impression of a giant seed pod. This photo was taken on Peacehaven beach, on the same day the Wombstone was found there. At the time I simply filed this picture away for future perusal- once I got around to said perusal, however, I realised it was entirely in keeping with the theme of gestation , as expounded in the Wombstone post. The signs are always there, even if it sometimes takes a while to see them.

The general theme of the Eternal Feminine reminded me that I’d been meaning to write something here about Dorothea Tanning, who reached the end of this perplexing (I speak for myself) earthly adventure a few weeks ago, on January 31st, at the age of 101. She was often described as “the last of the Surrealists”, although she disliked being categorised and would deliberately confound those who attempted it. (To the extent that when an interviewer referred to her as “a woman Surrealist artist”, she responded with the memorable rebuke,”I am not even a woman, let alone a Surrealist”.) 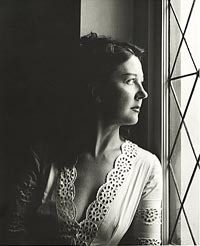 Her most famous painting is one of her earliest: Birthday, from 1942: 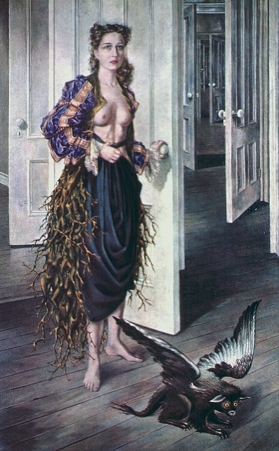 This is replete with Surrealist motifs and preoccupations: ambiguous eroticism, the presence of the mythical or fantastic (the curious winged creature in the foreground), and the journey into the unconscious, symbolised by the endless doors (my own subjective response- I have no idea whether this is the “approved” interpretation). These dark fantastical elements pervade her early work, for example The Witch, from 1950: 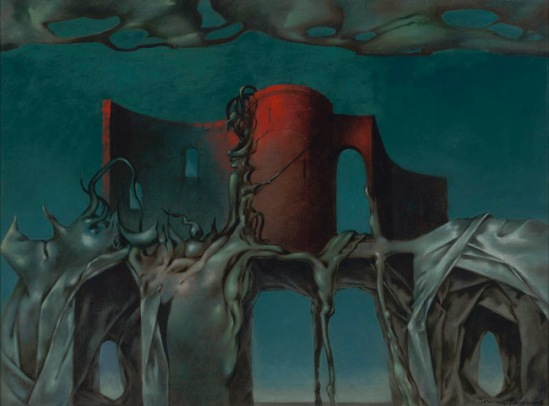 In the decades since this was painted, the popularity of cheesy ‘fantasy’ art and fiction has perhaps obscured our view of such work, and  I will admit that this particular painting now appears somewhat cliched, although it would not have seemed so at the time. But in any event, as the original Surrealist group fragmented, the artists involved headed into new territories, and Tanning was no exception. From the mid-1950s onwards, her style became more abstract, her canvases filled with amorphous, billowing clouds of colour. When form is discernible, it is often the form of the female body, albeit hinted at rather than clearly depicted, as for example in Ignoti Nulla Cupido, 1960: 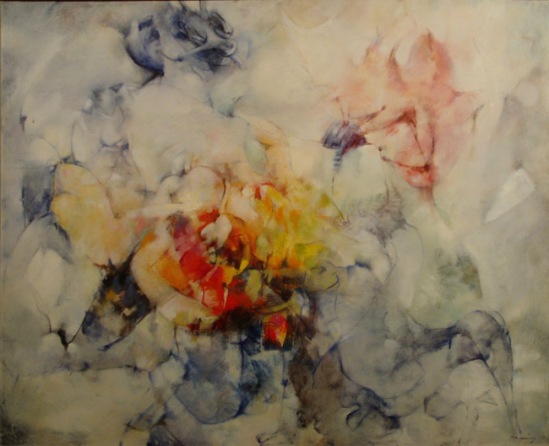 For me, these works compare favourably with any of the more celebrated Abstract Expressionism of the period. And there was much more to come: printmaking, sculpture, poetry, and a novel, Chasm, written in her 90s and published in 2004 (and on my ever-lengthening ‘must read’ list). Particularly influential were her soft fabric sculptures of the period 1969-1973. The installation Hotel du Pavot, Chambre 202 comprises a group of these: 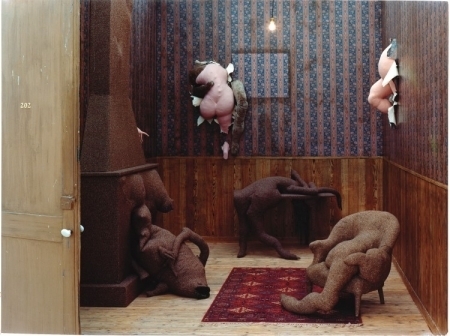 The objects are poised ambiguously between functional soft furnishings and strange fetishistic representations of the female form. Are these bodies splayed in ecstasy or abjection? Or are they simply navigating everyday life?

As well as all this, she was married to Max Ernst from 1946 until his death in 1976. In accounts of her life, the fact that she was Mrs Ernst is often given far more prominence than any consideration of her own art, and despite her devotion to him she would rue the impact of their union on public and critical perception of her work: aged 90 she chided an interviewer who seemed overly focused on Ernst thus: “He was part of my life for 35 years… but I’ve had 55 others” . Here, I have deliberately written about her work before mentioning Ernst, even though he is my favourite artist. Still, it’s quite a love story- they met in 1942, soon after Ernst (who was married to Peggy Guggenheim at the time) had emigrated to the US. The story goes that they fell in love over a game of chess (the photo below is from much later -note the Ernstian chess pieces): 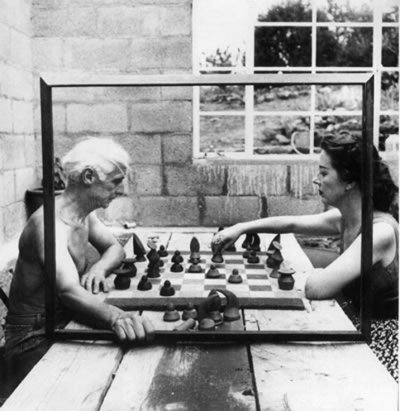 …and she later wrote of her first impression of him:

The presence of this profound and absolutely impenetrable something – was he carrying some special burden of knowledge beyond the things in books, a heavy Arcanum? – removed him ever so slightly from where he stood, so that his gentleness, his elegance and the whole amalgam of his being spoke of apartness.

Ernst must have felt she saw him as he really was: the above is surely how he experienced himself.

As a couple of Tanning’s obituarists (see links below) noted, at the time of her death her work was (and still is) featured in an exhibition entitled Wonderland: The Surrealist Adventures of Women Artists in Mexico and the United States, at the Los Angeles County Museum of Art. There is irony in this- she was disparaging of the term ‘woman artist’ and was fiercely unwilling to present herself as such, or to co-operate with the ‘gender studies’ industry, which took far more interest in her than she did in it. And this was despite the recurring theme of female physicality and sexuality that pervades her work. Her character, like her art, was too individuated to be assimilated by tick-box ideology, and she was scornful of attempts in this direction.

She was equally unimpressed by much of the art she encountered in later years. Asked in 2002 what she thought of contemporary art, she responded:

I can’t answer that without enraging the art world. It’s enough to say that most of it comes straight out of Dada, 1917. I get the impression that the idea is to shock. So many people labouring to outdo Duchamp’s urinal. It isn’t even shocking anymore, just kind of sad.

How right she was. 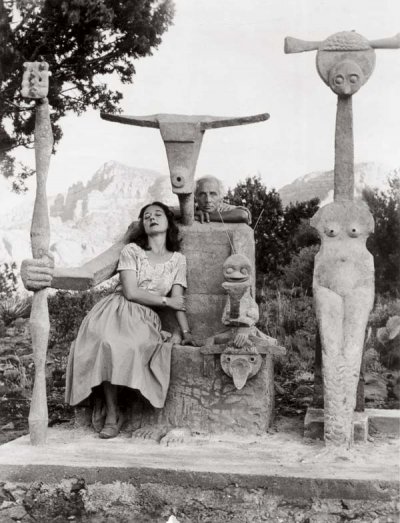 Read more about her life and work here, worthwhile obituaries here and here, and more idiosyncratic personal memories of her here.

The last word, of course, goes to Dorothea herself. When asked, at the age of 91, “So what have you tried to communicate as an artist? What were your goals, and have you achieved them?” she replied:

I’d be satisfied with having suggested that there is more than meets the eye. 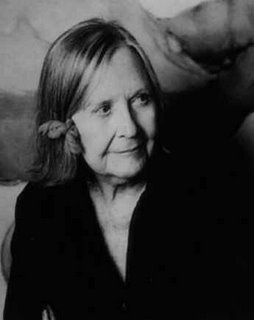 5 responses to “The Seed Pod and the Centurion”