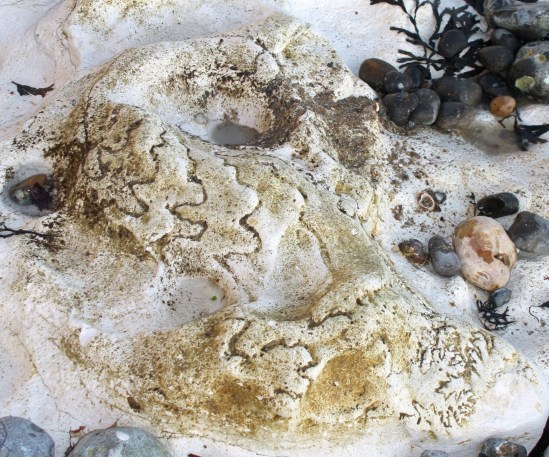 G.I. Gurdjieff taught his followers that their lives were deterministic, that human beings do not truly act, with volition and agency, but instead simply react. Indeed he went further, asserting that the entire cosmos proceeds in largely mechanistic fashion. But he also taught that, at the interface of two opposing forces, there arises a third: something produced by the tension, something alive, that has the potential to escape the inexorable laws of determinism. It is at this interface, this Shoreline, that life has the potential to become real, conscious, willed, as opposed to the ‘waking sleep’ that, for Gurdjieff, is our default mode.

The Shoreline is a liminal threshold. In an earlier post I described it as ‘the margin of land and sea, Consciousness and the Unconscious, Reason and the Irrational’. It is the Space Between, the ‘grey area’ of paradox, uncertainty and ambiguity, the alchemical flask in which sulphur and mercury meet, the tension between them unresolved and in dynamic flux.

The ‘mighty elemental forces that seethe and squall around the Shoreline’ (from another previous post) are no less than the forces of life and death. (The Shoreline is not merely about survival, however- its paradoxical nature embodies all the tensions of the human condition. In its fusion of elemental forces it even achieves a vivid eroticism, one that has passed into art, literature, and everyday conversation and thought. An example would be the image of a stormy sea, used so often to signify a tumult of erotic romance that it has become a cliche. There are many other examples). As we have seen, the great wheel of life and death is symbolised by Ouroboros, the serpent that eats its tail, signifying renewal and recurrence. But if ‘recurrence’ is not to be simply an endless loop, a cosmological Groundhog Day, then change and novelty must somehow be introduced, and elsewhere on this blog I have argued that this is the esoteric meaning of the egg of Ouroboros.

We have also seen that the cosmic serpent has its Shadow: and what is the Shadow of life itself? Death, obviously. The dual aspect of the serpent is precisely this: life and death. And here on the Shoreline we have recently seen a dramatic example of the dark side of the snake.

It is therefore reassuring to find that the Shoreline has mightily impressive defences against snakebites. The photo at the top of this post is a giant ammonite on Peacehaven beach, one of many to be seen there. These are not the kind of fossils you can take home and put on your mantelpiece: not unless you have stone-cutting powertools, a winch, and a truck (and a very large mantelpiece) – and if you do have these things, you still shouldn’t do it- there are, quite properly, restrictions on the removal of specimens from Peacehaven. And who knows what might happen if the Shoreline were to be denuded of these talismanic colossi?

Because in myth and folklore, ammonites are snakestones. That is, they were believed to offer protection against snakebites. The wonder of the worldwide web allows me to commend to you this paper from 1911, which explores folk beliefs from around the British Isles regarding fossils, and has plenty on the ammonite-as-snakestone. It appears that in some versions of this legend, ammonites  themselves were thought to be coiled, petrified (and headless) snakes. Having been turned to stone by the powers of the local saint (their heads falling off in the process), through sympathetic magic they became protective against snakebites- this may have involved ammonites being worn or carried as amulets, or used as a medicinal intervention if a bite had already occurred (e.g. by being rubbed against the wound, or ground into a medicinal drink). There are further re-tellings of saint-and-snakestone legends here.

The giant ammonites of Peacehaven are examples of the genus Parapuzosia, and are among the largest found anywhere on the globe. You can learn more about the fossils and geology of Peacehaven here, an excellent site whence I pinched the picture below, which shows three of Peacehaven’s largest Parapuzosia ammonites on their rock ‘pedestals’:

Like bulwarks they stand against the blind fury of the cosmic serpent- and the wanderers, shamans, scribes and servants of the Shoreline breathe a little easier for their presence.

5 responses to “Lodestones of Antivenom”