More fossils this week: these are belemnite fragments gathered from Peacehaven beach.

Belemnites seem to lag some way behind their (perhaps more aesthetically appealing) cousins the ammonites in terms of public affection, or at least recognition- most people seem to have heard of ammonites, anyway. But it may be necessary to briefly explain what a belemnite is, or was. They were sea-dwelling creatures that lived in the Mesozoic era (which began about 250 million years ago, and ended about 60 million years ago). Like ammonites, belemnites were cephalopods: squid-like creatures- indeed they were

probably distant forebears of our old friend the vampire squid. Unlike modern squid, though, they had an internal skeleton- a hard elongated ‘guard’, fossils of which are common coastline finds. Go here and here to learn more, and to see some specimens rather more impressive than the ones pictured above.

Information on belemnite fossils in Sussex seems scarce- I have no idea which species are found in this locality, and am unable to say much more about these finds from that point of view. So let’s get down to Shoreline business, and consider their mythic and esoteric import.

I’m intrigued to see the website of London’s famous Natural History Museum devoting pages to fossil folklore– when did they start doing that I wonder?- and here’s their lowdown on belemnites:

Because of their pointed shapes, it was once believed that belemnites were cast down from the heavens during  thunderstorms. This gave rise to their widely used name, thunderbolts.

There’s more on this here– some key extracts:

Belemnites are traditionally associated with thunderstorms and have many differing traditional names usually along the lines of thunderbolts, thunder-arrows or thunderstones. It was common folklore throughout Europe that these cylindrical bullet shaped fossils were cast down from the heavens as lightning, hit the ground and turned to stone. If one was struck by lightning it was believed that one had been struck with a thunderbolt.

The widespread nature of the association between belemnites and thunderbolts is illustrated by this:

In Russia belemnites are referred to as thunder-arrows, or gromovye strelki. Similarly in Lithuanian mythology belemnites are referred to as Pekuno akmu or Pekunas’ stone, Pekunas being the Thunder God and often compared to the Norse god Thor. It was also a traditional Germanic belief that to keep these thunderstones at home would afford the owners home from protection from lightning, and in parts of the Netherlands these donderstenen (Donar’s stones, Donar being the Thunder god) were kept in the roof.

And there’s more still here, in the 1911 paper “Snakestones” and Stone Thunderbolts as Subjects for Systematic Investigation by the redoubtable W.W.Skeat- an article we’ve consulted before, when considering ammonites, and which also contains much of interest regarding belemnites:

At Whitby, according to Robinson, the term thunderbolt applied to “the petrified remains of a kind of cuttle-fish, in the Whitby Lias, resembling tubes of various lengths and thicknesses tapering to a point.” The comparison here made between the “thunderbolt” of this kind and a tube is not quite accurate, since a tube is generally considered to be hollow, whereas these fossils are, with the exception of a small and shallow cavity at the upper end, perfectly solid, and may be more suitably compared to a cigar than to a tube. I may add that the Greek Belemnon, whence they get their name, means dart or javelin, and is connected with the verb “ballein,” to cast….  in J. Walcott (1779) we read that “the Belemnite receives its English name thunder-bolt from the vulgar, who suppose it to be indeed the darts of heaven.”

It’s also recorded that belemnites were used in medicine. Eye problems in horses were apparently treated by belemnites, ground into dust and blown into the unfortunate beast’s eyes. This is the sort of thing that’s worth bearing in mind the next time you hear someone waxing sentimental about the wisdom of the ancients, or similar.

In Lithuania, belemnites were held to be effective against snakebites- an interesting parallel with ammonites. In view of the significance of snakebites in Shoreline mythopoiesis, it would be noteworthy if both of these fossils, commonly found along this coast, were invested with belief in protective or healing properties thereof. But the only mention I can find of belemnites as snakestones is that reference to Lithuania. It would be interesting to know if this kind of belief was more widespread.

I would also be intrigued to learn whether the common association between belemnites and thunderbolts was ever a feature of Indian mythology or folk superstition. Because if so, this would directly link the belemnite with the vajra, the thunderbolt of the gods in Hindu cosmology: 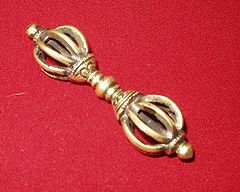 The vajra often appears as a divine weapon or attribute in depictions of Hindu deities, or in the tales about them.  Most significantly, the Rig Veda describes the first vajra being made for Indra, the hero. Indra then uses it to slay the serpent Vritra, which had brought drought to India by blocking the rivers (there are echoes of the story of Apollo and Python here).

So if the belemnite-as-thunderbolt trope can be extended to the Vedic myths, then we have another nexus of folk belief linking belemnites with the vanquishing of serpentine evil.

This would be of particular personal interest to me. I became interested in the symbolism of the vajra as long ago as 2003, when on a trip to San Francisco I saw this sculpture in the Asian Art Museum:

I have looked at many examples of Indian deity sculpture, but this one had a particular charge about it, and a powerful sense of grace and motion. Her name is Vajra Tara – ‘Thunderbolt Tara’- a particular manifestation of the goddess Tara, in feisty mode and fully tooled up with fiery vajra thunderbolts.

And, in fact, as I stood there before her, the goddess cast a thunderbolt directly at me. It lodged in my third eye, and it’s still there. But that’s another story for another day.

4 responses to “A Fistful Of Thunderbolts”