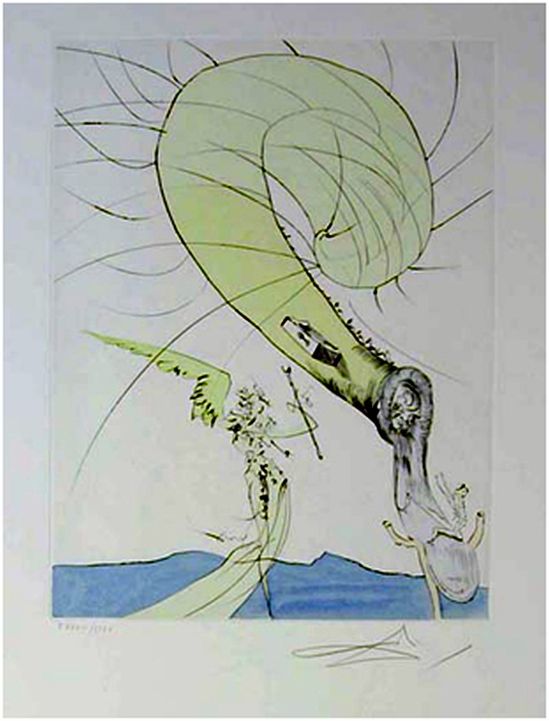 I was in Paris recently, and while there visited Espace Dali, a collection of Dali’s works housed in the Montmartre district. It is very similar to the exhibition that used to be on show at the rather corny Dali Universe ‘attraction’ in London (which closed in 2010), but I much preferred the style of presentation in Paris, which allows the work to stand on its own merits, rather than trying to turn the whole gallery into an advertising exec’s idea of a ‘surreal space’, as was the case in London. The show features mostly later and lesser-known works, many of which were originally commissioned by the Spanish government (Dali’s support for Franco is well-known, and utterly indefensible) for an illustrated series of literary classics including Tristan and Isolde, Romeo and Juliet, Alice in Wonderland, and both the Old and New Testament.

Dali is, in some sense, one of this blog’s presiding spirits; another is Sigmund Freud, whom Dali greatly admired. In July 1938, the two men met for the only time. What took place at that meeting will be the subject of a future post, but for the purposes of this one, it is important to know that, even before meeting Freud, Dali had apparently formed (and found great significance in) the idea that the ageing doctor’s head resembled a snail. This idea, and its importance, was confirmed in Dali’s mind by a synchronicity that occurred when he went to meet Freud in London: as he waited for the door to be opened, he noticed a snail on the seat of a bicycle parked outside the house. His subsequent meeting with, and observations of, Freud seem to have then reinforced the idea still further.

The image stayed with him ever after: as late as 1974 he produced Freud With A Snail Head, shown above. Like many of his late works,  it was rolled out as a pricey limited edition run of coloured etchings (the spectre of Salvador’s legendary avarice looms large at Espace Dali), one of which is included in the Paris show. I doubt that anyone has ever claimed that it is among his best work. Nevertheless, it is quite a curio item.

So why a snail? What do snails signify?

The picture below, which can also be seen at Espace Dali, is one of a series of works Dali produced for a 1967 illustrated edition of Casanova: 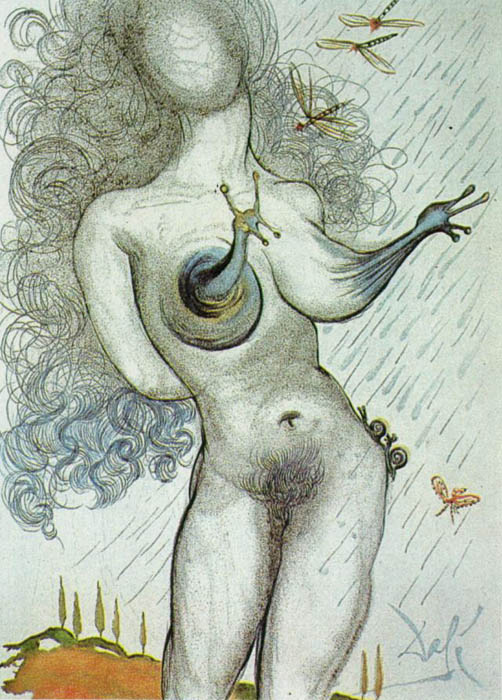 Here the erotic aspect of the snail is made explicit. The gallery notes allude to this, linking snails to lobsters and other sea creatures- another Dalinian trope. What all these have in common (along with eggs, another frequent Dali motif) is the combination of hard shell and soft, glutinous parts. When you think about it, though, almost any organism above a certain level of evolutionary complexity could be described as a melange of hard bits and squishy bits, so this symbolism might seem rather non-specific. Arguably, however, creatures such as snails and lobsters demonstrate this duality in its simplest and most obvious form, somewhat like living Yin/Yang symbols. 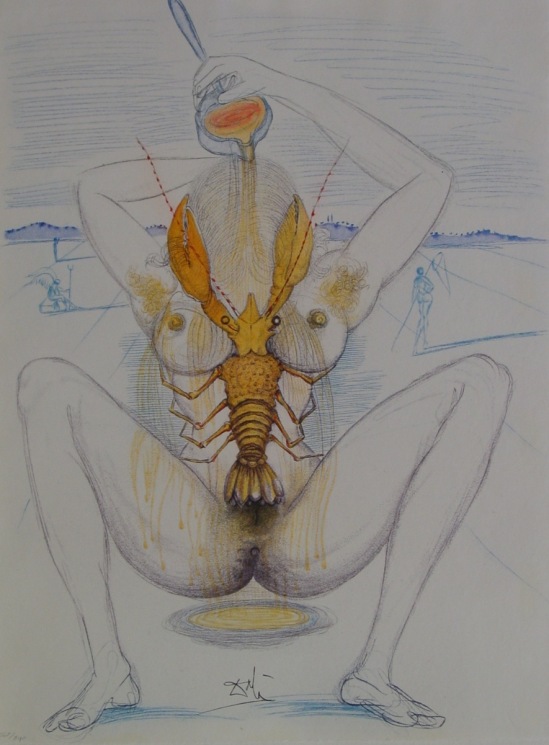 It is no coincidence that these hard/soft liminal creatures have also been prominent here on the Shoreline: consider the ammonites, the belemnites, the vampire squid, the cuttlefish (and for good measure the egg).

However, I suggest that it would be wrong to see the snail as simply one of a number of almost interchangeable animal symbols in Dali’s work. One senses that it has a particular significance that sets it apart from the lobsters and their ilk. Here, my speculative delvings into Dali’s psyche lean heavily on the central thesis of Ian Gibson’s 1997 book The Shameful Life of Salavdor Dali, by far the best book on him I have read. Gibson’s meticulous research supports an incredibly detailed chronology of Dali’s life (clarifying, correcting, and where necessary debunking the Dalinian myths)- a valuable enough resource in itself- but the book goes much further than this. It is a kind of psychological detective story based around Gibson’s key idea, which is that Dali was in thrall to shame. He was, Gibson contends, ashamed of his peculiarities, his social awkwardness and shyness as a youth, his emotions, his sexual quirks… he was ashamed of the physical grossness inherent in existing at all.. the bodily fluids and carnal slime… and ashamed yet further by his own fascinations with these things.

As Gibson elucidates, shame involves something doubly hidden: if a person is ashamed of, for example, a particular fetish, the fetish itself may well remain a secret, while the shame attached to it will also be hidden: thus we end up with a double secret. Feelings of shame can thus be associated with complex, multi-layered defences, and for this reason may prove particularly intractable.

Early in Dali’s artistic career, his association with Surrealism, immersion in Freudian theory, and the receptive socio-cultural conditions of the time all enabled him to explore his sexual paranoia and body horror in full public view. The Surrealists held that such explorations were liberating, but even as Dali spilled his darkest fantasies across his canvases, and in so doing secured the celebrity he craved, the hidden shame about what he was revealing tormented him more and more. He was, quite simply, ashamed of himself… ashamed of being Salvador Dali. Over time, and as his fame increased, he coped by retreating into the absurdist, and ultimately tedious, megalomania that became his trademark in later life. In short, he became a brand. He talked about ‘Dali’ in the third person, acknowledging that his public persona was a contrivance- but for him, perhaps, a necessary one.

And it is precisely this burning sense of shame which, I suggest, holds the key to Dali’s use of snail imagery.

As we noted, the snail can be readily interpreted as pertaining to the secret, the erotic, the taboo- and, therefore, the shameful. But Dali’s strange intuition that Freud somehow resembled a snail adds a whole new dimension to the meaning of the creature in the context of Dali’s personal mythos. The young Dali hero-worshipped Freud, attributing to him almost supernatural powers of insight, and believing that Freud’s theories were perhaps the first time in history that humanity had attained to certain insights about itself. Freud had penetrated the veils of normalcy and decency: he knew what lay beneath- the sex, violence, deviance… and, of course, the shame. Dali’s reverence for Freud reflected his view that Freud, in his writings, had exhibited a kind of X-ray vision of the psyche: he had described the problem of shame as it really was, as it afflicted him, Dali.  That Freud reminded him of a snail thus becomes enormously significant: the snail becomes symbolic not only of all the dirty slimy stuff down there in the psychic soil, but also of the knowledge of all this, and its revealing– and, by extension, of Dali’s private losing battle with his demons of self-loathing.

In Dali’s highly idiosyncratic personal universe, then, the snail is a symbol of extraordinary resonance and power. And as I wandered Espace Dali and all this fell into place, it occurred to me that my being in Paris afforded me the opportunity to perform a ritual in which the power of the snail- now enshrined in my own personal gnosis through the process of seeing (or perhaps concocting) these connections, this psychic narrative- could be brought into my orbit, its potent energies absorbed into my very being.

And, sure enough, just a couple of minutes’ walk away, I found an establishment where I was able to undertake just such a ritual. 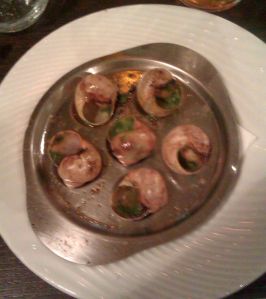 5 responses to “A Helix Of Slime”