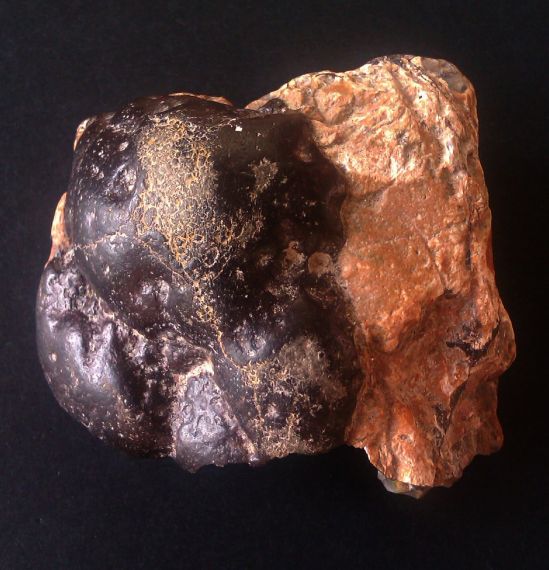 Here is the latest object of wonder to wash up from the depths at the psycho-alchemical arena of Saltdean beach – a large lump of oxidised iron ore embedded in stone, which I found at the edge of the tide, right on the very cusp of the Shoreline. I say ‘lump’- as far as I can ascertain the correct geological term is ‘nodule‘- any geologists reading are welcome to confirm or correct this. The whole thing is about the size of a tennis ball cut in half, but what the picture can’t communicate is the weight, the impressive heft of it. That will have to wait for such time as technology permits an immersive virtual reality version of the blog. In the meantime, just know that it’s heavy.

Here’s the other side of it…

.. and from this angle you can see that it is partially pyritised – that is, iron pyrite, a sulfide of iron commonly known as ‘fool’s gold’, has formed. There are little speckles of this ‘gold’ over the lower part of the nodule, and in the lower right-hand part it has formed distinctive ‘rays’, like a nascent version of the ‘pyrite suns’ sold by fossil and gemstone stores – see below for an example. 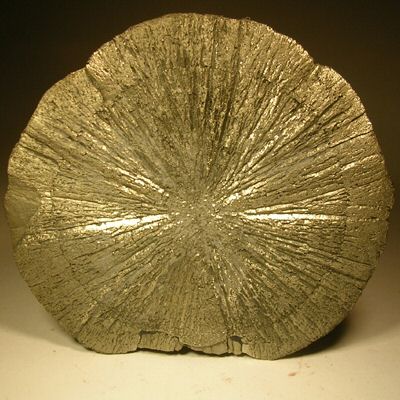 Now, iron is one of the ‘base metals’ of alchemy, and here we have iron in the process of turning to ‘gold’. So, an example of the transmutation of metals? Come off it, you say- it’s fool’s gold. Isn’t it meant to be, you know, actual gold? In fact, couldn’t we interpret this find as a damning indictment of all this alchemical shenanigans, this quixotic quest for transformation and truth? Doesn’t our iron nodule seem to say- yeah, there’s gold at the end of that cosmic rainbow, alright.. but it’s the gold of fools… so if you’re a seeker, you’re a sucker.

However, as we noted before, in esoteric (as opposed to exoteric) alchemy, the goal is nothing so vulgar as material wealth- rather, the ‘gold’ that the alchemist seeks is a metaphor for some inner transformation. The words used to express what this is will vary between times and cultures and need not detain us- what interests me here is the symbolism of fool’s gold itself. Specifically, the figure of the fool.

The Fool is the first Major Arcanum of the Tarot, and is numbered 0 (not 1 – we’ll come back to that). If the Major Arcana represent a journey, then the Fool is its protagonist and starting point, and here we see him embarking on his quest. In fact it appears he is about to step off a precipice, oblivious to the danger of being dashed on the rocks below. The usual interpretation is that this represents the leaving of the terra firma of Reason, and with it the step into the unknown that begins the Fool’s adventure. Foolhardy indeed it may be, but without this step, there can be no journey through the spiritual realm (or the labyrinth of Being, or the levels of consciousness, or whatever form of words you want to use).

But while the journey may have a starting point, it has no end- because the Fool’s path will eventually lead him back to the beginning. He may be wiser, but he he is still a Fool, and must undertake his quest again, and again, and again…

Standing on the precipice of the clifftop at Saltdean, looking out to the seas that call my name, I have often felt like the Fool I undoubtedly am…

.. . and this being the Haunted Shoreline, there was a strange synchronicitous twist to this remarkable find. Walking back from the beach, my eye was caught by another gleaming piece of metal, lying on the pavement as I neared home:

A squarish piece of metal, about the size of a postage stamp, with some frayed black rubber hanging off it. It looks like it might have come from a tyre – franky, I have no idea what it is. But note the letters ‘Fe’ embossed on the corners. Fe, of course, is the chemical symbol for iron. As I turned the strange silver square around in my fingers, the iron nodule seemed to burn in my jacket pocket, and the wind whispered a song of the Uncanny.

Indeed this little metal square looks rather like the images typically used to illustrate the elements of the periodic table- see here, for example. However, the other characters embossed upon it do not accord with this: 10 is not the atomic number of iron (that would be 26), and then there is the large ‘X’ in the centre- although this could just be another rendering of 10, X being the Roman numeral for 10. But ten what? The ten magical grades… the ten spheres of the Tree of Life.. the ten green bottles hanging on the wall?

Who knows? A man can drive himself mad trying too hard to extract meaning from (or impose meaning upon) the matrix of strangeness that causes things like this to wash up, and after a while I stopped racking my brains over it, and simply acknowledged that this particular Mystery was too baffling for this particular Fool.

But I can, I think, suggest a meaning for the iron nodule with which we began.

If the Fool is the perennial seeker, then we might feel able to say that fool’s gold is, paradoxically, the true alchemical ‘gold’ of inner attainment, thus turning the earlier interpretation on its head. Certainly anyone approaching our nodule of pyrite in a spirit of worldly avarice will be disappointed: its ‘gold’ is worth little in material terms, and will indeed make a fool of anyone who tries to become rich from it. But when the Shoreline Wanderer turns the hallucinated gaze of psychedelic omnivision upon this latest find, he seems to see, through veils of Mystery, glimmerings of Truth – sparkling and radiant like the stars.