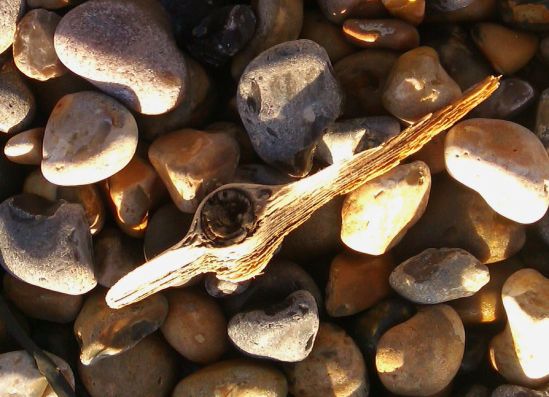 The final beach walk of 2013 yielded this curious piece of driftwood, which immediately struck me as haunted, crackling with life. I photographed it in situ on the beach, but only after I had picked it up and turned it around did I see what it was.

A feather – and given the recent return of Ancient Egyptian themes to the Shoreline, in the person of the crocodile-headed god Sobek, I was able to recognise it as (or, if you prefer, I decided on a whim to call it) the Feather of Maat.

Maat was an Egyptian goddess associated with truth, virtue, and justice.

The Feather of Maat was involved in the Weighing of the Heart, which, according to the prevailing religious myths of Ancient Egypt, was an essential stage of the journey into the afterlife. The heart of the deceased was placed on the scales and weighed against the Feather as a test of purity.

Here we see the heart on the left scale, the feather on the right, the weighing being conducted by our old friend Anubis, Guardian of the Shoreline (and we have previously considered the Weighing itself too, when meditating on the scarab stone).

If the heart weighs the same as the feather, the deceased may progress, journeying through the gates of the afterlife towards Aaru, paradise.

But if the heart fails the test, it will be devoured by Ammut, and the deceased will be condemned to remain in Duat, the underworld.

I decided to weigh the wooden ‘feather’. Remarkably, it weighs 21 grams – the precise figure
claimed by the eccentric turn-of-the-century Massachusetts physican Duncan MacDougall to be the mass of a human soul. MacDougall’s experiments (which involved weighing dying patients before and after death) were bizarre and unscientific, but the notion of 21 grams as “the weight of the soul” has persisted as a trope in popular culture, most recently in the 2003 film called simply “21 Grams”. Remember, to pass the Weighing, the soul must weigh exactly the same as the feather. So make what you will of the fact that this driftwood totem weighs 21 grams.

That aside, the Weighing of the Heart is an apposite image for this particular time – because, as I type, we are, here in the UK at least, in the first minutes of 2014, standing uncertainly at the threshold of past and future. Around the world, in private or public, people are hoping for better, replenishing their optimism, wishing each other well, and swearing oaths and promises, resolutions for the perilous journey ahead. Will we make it to Aaru, or find ourselves lost in Duat (again)?

Good luck, as you face your own personal reckoning at the turning of the year. You may need it.

10 responses to “The Feather Of Maat”