As with the previous post, the latest message from the Shoreline comes in the form of synthetic detritus, washed up from the depths onto the beach, on this occasion at Birling Gap, near Beachy Head, a place I hadn’t visited for a while. A recent stroll along the shore there yielded a number of interesting and, in some cases, amusing finds.

Towards the end of last year I theorised that there had been a change in the alchemical polarity of the Shoreline current, from feminine to masculine. The Shoreline now appeared to confirm this in the most direct way possible – yes, it only went and got its cock out:

Punning aside, the most striking find was the large plastic ‘wheel’ pictured above, which had come to rest in such a way that it called to mind the Wheel Of Fortune from the Tarot:

This card drips with allusions – the angel, eagle, lion and bull arranged around the corners are the symbols of the four Evangelists… the letters on the Wheel itself can be read as ‘TORA’, ‘ROTA’ or ‘TAROT’… the interspersed Hebrew letters form the Tetragrammaton, the name of God in Judaic tradition. Then there’s the serpent wriggling down one side of the wheel, an image we have considered many times (for example here).

But here I want to focus on the horned figure that seems to be carrying the Wheel, or perhaps rising into manifestation as the Wheel turns. Most sources seem to agree that this is a representation of our old friend Anubis. The combination of Anubis and the turning Wheel is particularly apposite for the Haunted Shoreline, as Anubis was the start of this quixotic venture, back in December 2011. It was the discovery of the flint ‘head of Anubis’, also at Birling Gap, that signalled to me that it was time to embark on this psychonautical cave-diving expedition: not only was the find simply too striking to ignore, but it was also entirely appropriate, because Anubis, as we have seen elsewhere, is the guardian of the underworld, and accompanies the deceased as they make the transition from the waking world to the afterlife, from the mundane to the imaginal… or, in Shoreline terms, from land to sea. Anubis seemed the perfect starting point, not only for me, but for visitors to the blog – an initiatory presence that would guide them into the world of the Haunted Shoreline (at this point, I naively imagined that interested readers would begin at the beginning and work their way through the thing, and its various interconnected strands, as if it were a kind of novel or map. But I soon realised that most internet surfing is done in gadfly fashion; very few people engage with a website the way they might with a book).

I have often considered revisiting Anubis and saying more about his initiatory aspect here – that original post, simply a pair of images and a link to a painting I considered very relevant – was perhaps too idiosyncratic and allusive to convey the meanings at which I was aiming. But somehow it has never seemed the right time. Until now. The winter storms have passed at last, Spring is here, the Wheel Of Fortune turns, and we are back where we started. Maybe the period of time between then and now is a Shoreline Year, or something. Maybe this is even the end of the project – as ever, I have no clear idea of where it will go next, instead I simply await further signs from the beach, and from the ebb and flow of daily life.

There is, however, one other important message encoded in this latest beach find. The plastic ‘wheel’ is actually part of a lobster pot, smashed by the sea and washed up on the shore. In the last post we considered mental liberation: the breaking of William Blake’s mind-forg’d manacles. Now we have an actual revolution – in the sense of a full turn of the Wheel. Not only that, but this is a Surrealist revolution: a smashed lobster pot. Yes, the lobster is out of its pot, and who knows what mischief will follow as it roams free across the shores of consciousness…

Meditate on this. Tell everyone you know, and keep watching the shores. The lobster is out of its pot.

And still they come – the fearsome storms of recent weeks persist, and the consequent roiling and churning of the ocean continues to result in all manner of strange detritus, both natural and man-made, washing up from the depths and onto the beach. On 9th February (9/02 – a significant formula in Shoreline numerology) there was a day of respite, and although it didn’t last it did at least give me the opportunity to take a walk on Saltdean beach at low tide, and see what fresh wonders the sea had brought. The first thing I found was that part of the beach was littered with whelk egg cases, a few of which are shown in the picture above. These are not, in fact, particularly unusual finds, but normally one finds the odd one here and there, not dozens of them as was the case on the 9th. The symbolism of eggs, fertility, and gestation has been considered here many times (new readers can find more on that here, here, and here), so I will not reiterate those ideas – instead I want to focus on the fact that these particular egg cases look very much like brains. And mere moments after being struck by this resemblance, I came across this assemblage of flotsam… 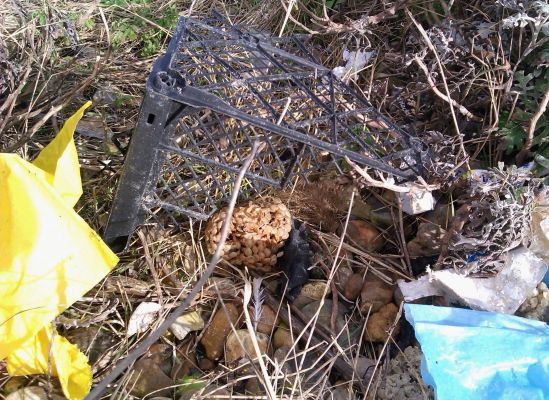 … and immediately the phrase the mind in the cage bobbed up from the depths onto the shores of my consciousness.

The mind in the cage – echoes of William Blake’s mind-forg’d manacles, the psychospiritual ties and conventions that bind, restrain and imprison us. But here the violence of the stormy sea has blown the cage open… and elsewhere on the beach there were further fragments of meaning. A little further on I found this: 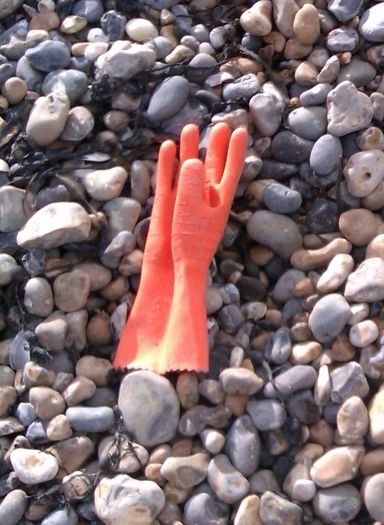 An orange rubber glove may not seem the most esoterically charged of objects, but the signs are always there and this particular glove is a dead ringer for the one in Giorgio de Chirico’s 1914 painting The Song of Love:

This painting predates the Surrealist movement by a decade, but its motif of familiar objects in unfamiliar and dreamlike juxtaposition is clearly proto-surrealist and it was a key influence on the subsequent art and method of the Surrealists.

Put these pieces together, and the meaning becomes apparent. The anger of the storm, the turmoil of the ocean… all this is the violent upheaval- some might call it a revolution – required to blow open the doors of our mental cages and take the dizzying leap into the Marvellous. The psychological and political implications are clear.

One may not draw comfort from this, but one can imbibe something altogether rarer: hope. 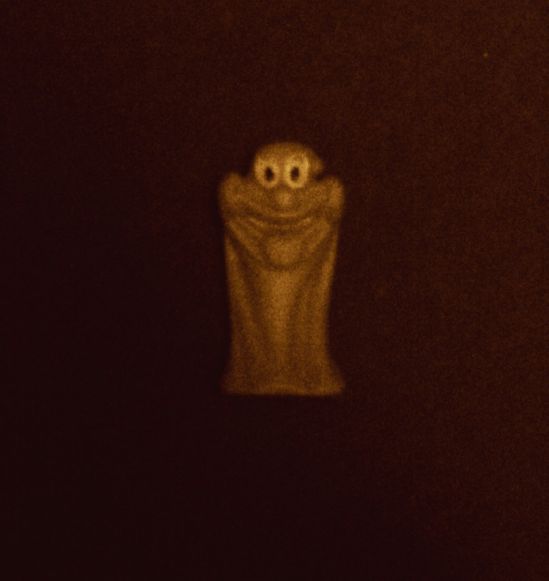 It is rare for me to feature something synthetic rather than stone or organic. This was not a deliberate decision from the outset: it’s just that there seems to be truth in them there stones, more than in them plastic gee-gaws. Perhaps this is unsurprising. But here is an exception – this is a small plastic ghost my daughter found washed ashore recently (all the photos of it came out this badly, and then the cat batted it under the oven). Initially I thought it might be some tiny piece of Ghostbusters-related merchandise but, upon Googling, saw that it bore far less resemblance to anything in Ghostbusters than I’d initially imagined. It remains unidentified, one of a number of curious minor characters to wash up on the Shoreline of late.

The remaining oddballs presented here are a succession of stony visages. Together they form a set of quirky, nameless bit-part players. No great deities or demons these: unremarkable creatures in fact, flotsam entities drifting in on the tide of Being.

One could see the first as a frog, the second as a seal…

… and a friend remarked of the third that it could plausibly represent Makka Pakka reacting to being sacked from In the Night Garden (go here if that reference baffles you). Maybe so – and, in fact, popular childrens’ TV characters may well have the kind of mythic power with which I try to infuse the fruits of my beachcombing. But psycho-alchemical analysis of preschool TV seems a flight of fancy too far, even here.

Only recently did it strike me where I had seen such figures before. It is not so much that there is direct physical resemblance, but they have something of the same mien and aura as the figures in Max Ernst’s Feast of the God. 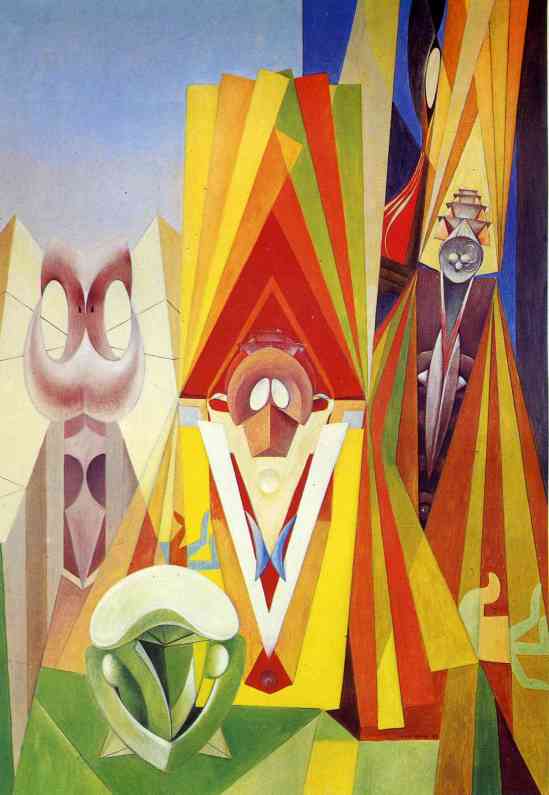 And it seems an appropriate time to now assemble this motley crew and present them here, because the phrase feast of the god neatly describes recent events on the Shoreline. Stay tuned: these events will be recounted in upcoming posts, in which the glitter prism gaze of psychedelic omnivision will be turned upon them, and they shall give up their secret meanings.

Poetry leads to the same place as all forms of eroticism — to the blending and fusion of separate objects. It leads us to eternity, it leads us to death, and through death to continuity. Poetry is eternity; the sun matched with the sea. Georges Bataille, Death and Sensuality